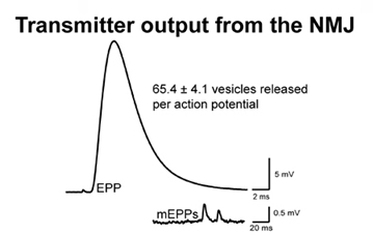 The magnitude of chemical transmitter released from a mouse neuromuscular junction recorded using and intracellular microelectrode. Quantal content is calculated by dividing the amplitude of the EPP by the average amplitude of mEPPs recorded from each synapse. 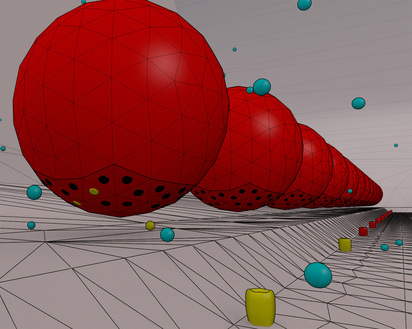 We have been using mouse neuromuscular preparations to study the regulation of transmitter release in both normal mice, and those that have been passively-transferred the disease Lambert-Eaton Myasthenic syndrome. In addition, we also use con-focal imaging of neuromuscular junctions stained with various antibodies directed against presynaptic proteins to characterize the presence and distribution of relevant molecules. This work furthers our understanding of calcium-dependent mechanisms, and is part of our effort to evaluate the effects of novel calcium channel agonists that might be of therapeutic benefit in diseases that result in neuromuscular weakness. 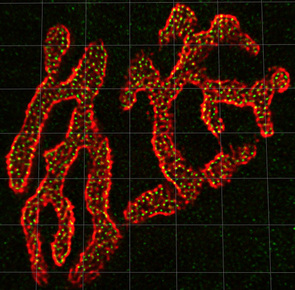 Confocal image of a mouse neuromuscular jucntion stained with Alexa-594 alpha-bungarotoxin (red) to label postsynaptic acetylcholine receptors on the muscle cell, and Alexa-488 labeled bassoon antibodies (green) to label synaptic vesicle docking sites (active zones) in the presynaptic nerve terminal.  The average mouse neuromuscular junction has about 800 active zones that all roughly equally spaced from one another by about 500 nm.  Grid lines = 5 uM
Development of novel calcium channel gating modifiers

We are collaborating with Dr. Peter Wipf's group in the Department of Chemistry to develop and test novel calcium channel gating modifiers that are selective for agonist effects on the types of calcium channels that regulate transmitter release at synapses (N- and P/Q-types).  We use cell lines expressing various calcium channel subtypes as a model system to examine directly the gating and modulation of these channels, and the effects of various novel drugs. In particular, we are interested in novel drugs that increase the flux of calcium through open channels as potential first-in-class therapeutics for the treatment of neuromuscular diseases.  A major focus of our studies is the disease Lambert-Eaton myasthenic syndrome that causes neuromuscular weakness due to anuto-antibody attack and removal of a fraction of the presynaptic calcium channels at neuromuscular junctions. 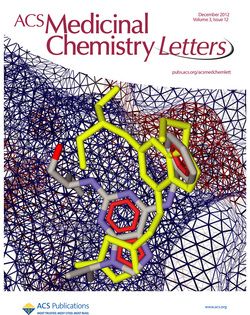 Docking of a novel calcium channel gating modifier to the cdk2/roscovitine complex.  Our novel drugs were developed as derivatives of (R)-roscovitine and modified to reduce binding to cdk, while preserving calcium channel agonist activity. The electrostatic interaction surface at the binding site region is displayed and colored red for negative charge and blue for positive charge. Docking simulations were performed by Dr. Gabriela Mustata Wilson using Molegro Virtual Docker, taking into account side chain flexibility for all residues in the binding region. 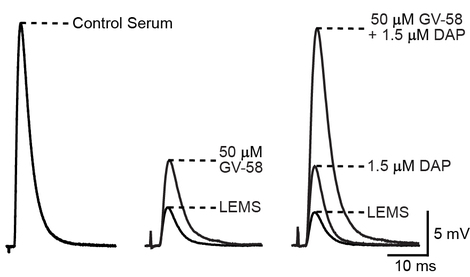